After making a daily low of $53,329, Bitcoin gained some momentum and is trading at $56,863. Meanwhile, the second-largest cryptocurrency, Ethereum, is trading close to $3,473.

The Secret Network announced its integration with Binance Smart Chain (BSC) to empower users with diversified features. As per the tweet, the team has launched a Secret BSC Bridge, which will allow users to move their assets between BSC to Secret Network and vice versa. The Secret Network is an open-source blockchain that aims to fix the privacy issues of the decentralized web through its encrypted inputs, outputs, and encrypted state for smart contracts. In addition, the SCRT token is also available on BSC as a BEP20 token, which allows users to utilize Secret DeFi applications such as SecretSwap, the front-running resistant, cross-chain, and privacy-first AMM. Additionally, the team is also working to expand Secret Network while upgrading applications such as SecretSwap and Secret NFTs.

Ultimate Fighting Championship (UFC) announced the launch of its first blockchain-based fan token. This was accomplished by UFC partnering with Socios.com to launch its UFC fan token on the Chiliz blockchain. As per the tweet, this token will empower fans with unique digital and real-life rewards. In addition, the token holders can enjoy VIP rewards and get access to vote for fight events. The announcement also stated that this token will launch in June with a maximum supply of 20 million tokens. Recently, AC Milan and Barcelona also launched their fan tokens; hence, UFC now becomes the latest sports authority to use fan tokens to attract new fans and offer rewards.

The coin of the day for today is Chainlink (LINK), which has exploded roughly 500% since the start of this year. It has surged from $11.25 to a high of $50.85 since January. Moreover, this recent uptick is due to the demand and adoption of Chainlink oracles and its VRF. In addition, this price surge has fueled its market cap to over $20 billion and holds the twelfth largest crypto asset by market capitalization. Recently, Chainlink also launched Chainink 2.0 to boost hybrid smart contracts.

At the time of publication, LINK was trading close to $47.65. Before that, it had recorded an all-time high price of $50.85. As per technicals, LINK is broken out of the symmetrical triangle. If sellers book profit at this range, then it may retrace to the $43.00 and $37.00 regions. On the flip side, if LINK breaks above the $51.00 resistance, then it can move further upside towards $60 or higher. 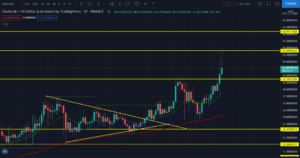 In the last bit of crypto news for today, we have XFai announcing high APR earnings for $XFIT token holders. As per the tweet, users can participate in this liquidity farming by purchasing $XFIT through Uniswap. XFai develops infrastructure and tools to enhance the APY earnings of DeFi tokens. This upgrade helps users to earn three-digit APR with staking of LP tokens in XFai liquidity farming. Further, this would also benefit the current users through an increase in TVL (total value locked). In turn, this raised TVL will increase the dollar value of the $XFIT tokens in the near future, as well as this would help in the long-term growth of $XFIT.

Notably, Uniswap V3 is also coming to empower users with new innovative features and to reduce transaction fees. To uplift the user experience, Unbound Finance launched the first derivative layer on Uniswap V3. Impressively, users can utilize this to add liquidity at distinct ranges and earn NFTs in return.