The Solana train doesn’t seem to slow down as the $SOL token, this week, has achieved another remarkable milestone. $SOL, according to Coingecko in the last 14-days has rallied by 104.4%.

The Solana ecosystem continues to record massive growth with the addition of more DeFi and dApp projects on its platform. Meanwhile, Solana is bracing to start its fourth hackathon with USD5 million in prizes and seed funding up for grabs.

Here are the recent exciting updates from the Solana ecosystem.

The Solana ecosystem has grown incredibly, surpassing $11 billion of the total value of assets locked (TVL) on its platform. Raj Gokal, cofounder and COO of Solana, disclosed this via his official Twitter account. Also, DeFillama has reported it.

$10B locked on @solana fyi pic.twitter.com/1sVAW1zJTV

The milestone achievement can be credited to a vast array of projects using and building on the blockchain platform.

On the other hand, popular projects built on Solana like Raydium, Saber, Serum, and SolFarm are among the largest Solana TVL contributors. Therefore, Saber, an AMM for trading assets on Solana, seems to stand out from the pair with its recent rise.

Saber recently became the first protocol on the Solana ecosystem to have over $3.5 billion total value assets locked. Meanwhile, Sunny Protocol is quite close with 3.1 billion TVL, and Raydium with $1.7 billion TVL.

Certainly, Solana is still in its early stage, despite its tremendous growth when compared to other blockchain initiatives. On the other hand, Ethereum currently has $103 billion TVL, and the closest blockchain, Binance Smart Chain stands at $16.7 billion TVL.

Jeremy Allaire, CEO and founder of cryptocurrency firm, Circle has expressed his delight with the growth of USDC on Solana.

3/ Our mission and vision has been that USDC could become a protocol for commodity free payments on the internet, and combined with 3rd generation chains, could become a foundation to the future of internet capital markets.

Allaire expressed his satisfaction with the growth of the stablecoin via a tweet from his official Twitter account. According to him, USDC’s growth will rose from 1 billion in circulation to 2 billion in a week.

Circle CEO explained that USDC was launched to ensure easy payment for commodities on the internet. He also revealed that the stablecoin aims to become the foundation for the future of internet capital markets.

He said: “We are getting so much closer to the vision being realized.  One can easily make P2P payments with USDC using @ftx_app (hosted) and @phantom (un-hosted) at virtually no cost, and in seconds.  Bye bye @Venmo , but global scale.”

As a consequence to its incredible growth, the Solana ecosystem has recorded its first-ever million-dollar NFT sale. The NFT, a Degen Ape #7225 was acquired by Moonrock Capital for 5,980 SOL ($1.1 million).

The Degen Ape #7225 was a scarred zombie ape with a golden halo, a golden tooth, and a brain in its mouth. According to HowRare, the acquired Dengen Ape NFT was the 13th rarest in the collection.

Additionally, Moonrock Capital also disclosed that it has purchased the 18th rarest SolPunk for 1,388 SOL ($260,000). Also, Solana token growth has also been credited to the recent purchase of NFT of its platform.

Lido, a protocol that brings liquidity to staked assets has officially launched on the Solana blockchain. As a result, Lido’s liquid staking is now live on the Solana ecosystem.

The protocol will enable $SOL holders to stake it and receive rewards while retaining the ability to collateralize their stake in DeFi applications such as liquidity pools or lending protocols.

Lido noted that integration with several DeFi applications on Solana will allow $SOL holders to earn rewards. Also, the protocol revealed that it would make the value locked in staked $SOL accessible by issuing $SOL in the exchange.

Additionally, Lido has already passed over $6 billion stacked tokens on its platform and will offer Solana users unique and exciting features. Such as decentralized security, one-click staking, and premium liquidity.

The ongoing Solana ecosystem hackathon seems to be gathering more hype with the addition of more sponsors and judging panels.

The hackathon, called “Ignition“, is expected to conclude October 8 with USD5 million in prizes and seed funding. Ignition is supported by Microsoft, Jump Trading, Standard Chartered, Forte, and Metaplex. The event will focus mainly on four tracks; Web3, DeFi, Gaming, and NFTs.

There are 2 new additions to the Solana IGNITION Hackathon judging panel!

If you haven’t registered yet, do so soon at https://t.co/boDEK9kb0q pic.twitter.com/aNRQo3XC82

As the post above says, Solana has announced the addition of Cassidy Williams, director of the developer experience at Netlify, and Erikan Obotetukudo, founder and managing partner at Audacity as new judges for the Ignition hackathon.

Also, PsyOptions is sponsoring a $30,000 award for the project that best integrates with their options trading platform. And Figment has also partnered with Solana to award the best educational content with $15,000 in $SOL.

Since January of 2021, $SOL has increased its value by more than 10,100% to secure its place as the seventh-largest token by market cap. 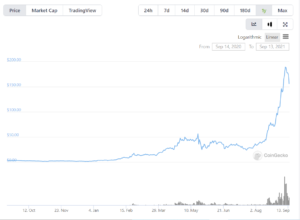 Is Polygon the Most Secure Blockchain Now?